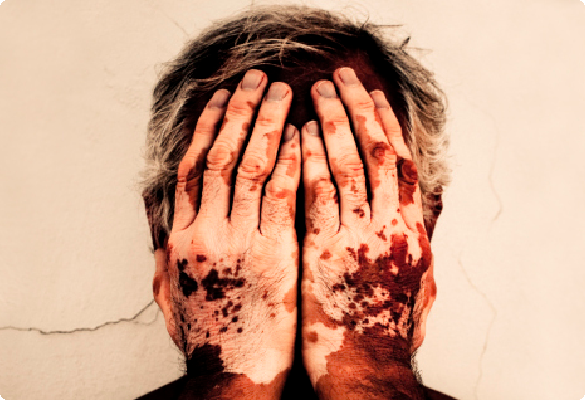 Vitiligo (pronounced vit-ill-EYE-go) is a generally unpredictable skin disease that causes a gradual loss of skin color and overlying hair on different parts of the body.

Contrary to popular belief, vitiligo is not a cosmetic disorder but a systemic disease affecting the largest body organ and other vital systems. Vitiligo is a life-long condition and it’s unlikely that one will ever be completely free of it.

The good news is that vitiligo – upsetting as it can be to those living with it – is neither life threatening nor contagious. A proper treatment protocol may effectively put it under control and reduce appearance of white lesions.

What Are Vitiligo Symptoms?

Vitiligo signs vary considerably from person to person. It is more pronounced in people with dark or tanned skin. Some may only acquire a handful of white spots that develop no further. Others develop larger lesions that join together and cover significant areas of the skin.

Vitiligo commonly affects areas on the skin that are exposed to sun, previous sites of skin injury, body folds -– such as armpits – and areas around body openings, genitals also may be affected. Initially, the vitiligo may start as a patch that is slightly paler than the rest of your skin but will gradually become completely white.

The edges of the patch may be smooth or irregular and may have an inflamed red border. Typically, vitiligo produces symmetrical depigmented areas of skin that otherwise appear perfectly normal. Hairs above vitiligo patches may also lose pigment and appear white. A halo nevi – a mole with a white ring or ‘halo’ around it, usually on the trunk – can be an early warning sign of a generalized vitiligo.

An early distinction between two basic types of vitiligo -– segmental and generalized -– is very important in predicting disease activity and choosing the right treatment. Yet, not every white lesion is a sign of vitiligo. A well-trained dermatologist should be able to distinguish vitiligo from contact leukoderma or more than twenty other conditions with similar skin appearance.

How Many People Have Vitiligo?

The average prevalence of vitiligo is between 0.5% to 2% of the world population, but local numbers may vary from 0.004% to 9.98%, depending on the region and age group. The total number of people suffering from vitiligo is estimated at around 65-95 million people worldwide. However, the actual number may be much higher because vitiligo is an underreported disease.

What Is Known About Vitiligo?

Surprisingly, the causes of vitiligo are yet to be precisely established. Complete knowledge of its etiology has proved elusive, despite decades of intense research. A complex and poorly understood chain of reactions is controlled by many genes involved in the immune system response and melanogenesis. It is beyond our current ability to understand how combinations of seemingly hundreds of genes result in a vitiligo patch.

We do know that an obscure triggering event creates stress in the pigment-producing cells of the skin. An over-reactive immune system mistakenly identifies these stressed-out cells as intruders. Specialize cells called T-cells neutralize these ‘enemies,’ driving progressive skin depigmentation. This can happen to anyone, at any age, in any social group.

The current thinking is that vitiligo represents a group of immune-mediated disorders with a similar outcome – the appearance of white patches on the skin. The convergence theory states that intense psychological stress, genetic predisposition, altered cellular environment, toxins exposure and impaired digestion can all contribute to the initiation process of vitiligo.

Autoimmune mechanisms likely underlie generalized vitiligo, while a more localized phenomenon may be responsible for segmental or focal type. Vitiligo may also develop at the site of physical skin trauma – this is known as the 'Koebner phenomenon.'

Nearly half of vitiligo patients say the disease appeared as a tiny blotch and later spread to a wide pattern after severe physical or mental stress. These are called precipitating factors, because they are not the cause of the disease, but induce its appearance. For instance, liver and thyroid diseases could be precipitating factors for vitiligo.

About half of vitiligo cases begin in childhood, often popping up in springtime without warning. Children with vitiligo may have a higher chance of developing other autoimmune diseases, such as alopecia areata, diabetes mellitus, pernicious anemia, Addison's disease and thyroid disorder. Although rare, hypothyroidism is particularly worrisome in this age group because of its potential impact on growth and health status.

Children born to parents who both have the disorder are more likely to develop vitiligo. However, most children will not get vitiligo even if one parent has it. In children with focal and segmental vitiligo, there is often no family history of vitiligo or other autoimmune disorders.

Generalized vitiligo is associated with a tendency to autoimmune illnesses, the most common being thyroid disease. Weak correlations between vitiligo and endocrinopathies, type 1 diabetes, Addison’s disease, lupus, rheumatoid arthritis, and alopecia areata are also observed. In small studies it was found that vitiligo might negatively affect hearing and eyesight.

On the positive side, vitiligo has a protective benefit against melanoma and other deadly skin cancers. And because of the hyper-active immune system, those with vitiligo often say they are less affected by common colds.

The course of vitiligo is usually progressive, with phases of long-term stability or even spontaneous reversal. The average remission period after successful treatment of active vitiligo is four years.

What May Cause Vitiligo?

Researchers know the cause is pre-wired in your genes, just waiting for a bad luck moment. In about half of all cases this can be a specific trigger or an unfortunate combination of benign conditions. In the other half, the cause of vitiligo remains unknown.

Psychological stress is the most frequently reported trigger for vitiligo. Severe sunburn, physical skin damage, prolonged contact with certain chemicals may induce or worsen vitiligo. Hormonal changes during pregnancy, delivery and menopause may be the culprit. Parasites and chronic gastritis that impair absorption of vital elements by the digestive system may also indirectly cause vitiligo.

Chemical triggers include materials with:

How Vitiligo Is Treated?

Simply put, patients can do one of three things with vitiligo: try to restore pigmentation, camouflage the white patches, or destroy the remaining color to have all-white skin.

Vitiligo should ideally be treated within two or three months of its first appearance, because as the condition progresses it becomes harder – although by no means impossible – to treat. Even ten, twenty or thirty-year old vitiligo spots may be re-pigmented with enough patience.

The problem is that there’s currently neither a cure for vitiligo, nor a universally accepted method for limiting the spread of the disease. Although many treatments are being used for its management, none is licensed specifically for vitiligo, in the EU or the US, and it is not possible to predict what will work best for which patients.

Factors to consider include age of patient and disease onset, type of vitiligo and localization, familial and disease history, overall health condition and comorbidities, living and working environments, prospects of frequent travel or military service, financial situation, access to certain treatments, and most importantly - personal motivation. About a third of patients are non-respondents to any therapy.

Symptoms are temporarily reversible with a range of treatments, and their combination works far better than a monotherapy. Light therapy remains a gold standard but it may take one or two years to restore natural skin color. Dietary supplements or vitamins can only mildly enhance phototherapy effectiveness and are incapable of creating a lasting effect on their own. Experimental treatments for vitiligo like afamelanotide, HSP70i, JAK inhibitor, prostaglandin, or simvastatin might work for some people, but researchers just haven’t figured out exactly who that is yet.

White lesions frequently reappear when treatment is discontinued, with relapse occurring in nearly half of all patients within four years of stopping treatment. This relapse can be significantly decreased using periodic treatment with supportive procedures.

WARNING! Please do not self-diagnose, self-prescribe or self-treat based on ideas contained on this website, or any other publication. Recommendations provided here are for your general knowledge and discussion with a specialist only. These must be tailored by a doctor to an individual patient. It is important to consult with an experienced specialist – via telemedicine or in-person – before starting any treatment for yourself or your child.

Mega-stores like Walmart or Costco often sell prescription and over-the-counter drugs at significant savings, while many hospitals offer discounts of 30% or more to cash-paying patients.

Whichever track you took through this website, you now have a better overview of vitiligo than 99% of people who live with it, or are helping a family member who has vitiligo.

If you are interested in taking part in clinical trials of new therapies, visit our Trial Hub. Information is provided by the U.S. National Institutes of Health and updated here on a monthly basis.

The Vitiligo Research Foundation (VRF) does not endorse or recommend any commercial products, processes, or services.

Please be advised that all information is intended for your general knowledge only and is not a substitute for medical advice or treatment for specific medical conditions. Users are warned against changing any aspects of their treatment, diet or lifestyle based on this information without first consulting a registered medical practitioner. While every precaution is taken to ensure accuracy, VRF makes no warranty as to the reliability, accuracy, timeliness, usefulness or completeness of the content which reflect personal opinion of the authors.