News - 16 Apr `19New therapies for vitiligo are in the pipeline. How soon we'll see them in the clinic?

Until about a decade ago, dermatologists believed that all vitiligo patients were created equal. And so they were treated that way because the arsenal of available weapons to fight them was woefully small.

The standard operating procedure was to typify vitiligo by what body part it affected and it’s shape. All dermatologigsts had to work with was either a phototherapy or (rarely) microsurgery, usually combined with topical treatments. That is still being done, though the vitiligo landscape is rapidly evolving.

At the vitiligo session held during a recent Iaşi Dermatological Spring congress, Prof. Torello Lotti reminded participants about a complex and systemic nature of vitiligo, or rather, - vitiligos. First, dermatologists have to diagnose a specific subtype of vitiligo based on its intrinsic properties, some yet have to be clarified. Next, check for underlying and overlapping conditions. Then, move away from the one-size-fits-all approach that characterised vitiligo therapies up until recently and make it more personalised, safe and effective treatment.

New treatments for autoimmune conditions, like vitiligo, rely on inactivating the 'crazy' immune cells that mistakenly identify and attack the body's own healthy cells. The outcomes of such treatments are far from being perfect, but benefits usually outweigh side-effects.

A modified HSP70i protein may be regarded as a good candidate for stopping rouge T-cells and thereby reversing an autoimmune process. Preclinical data obtained in mouse models support the trial of the mutant protein in humans. HSP70i-based therapy for vitiligo is now being developed by Temprian Therapeutics from Chicago. The company is seeking regulatory approval and venture funding for clinical trials.

Another promising drug candidate targets and removes the memory cells responsible for recurrent vitiligo. For example,  a combination treatment with JAK inhibitors — such as tofacitinib — blocks interferon gamma signaling and helps in restoring the skin color. The problem is that the therapeutic effect is only temporary, and vitiligo usually reappears as soon patient stops using it. Dr. John Harris and colleagues from UMass in Boston have determined that autoimmune memory cells are responsible for vitiligo relapses, and found the way to remove resident T-cells from the skin. According to Dr. Harris, this may provide “long-lasting results typically not seen in dermatology.”  Research has already turned from academia to biotech development phase.

Autoimmune therapies represent a great alternative to the old treatment paradigm, and may have fewer and milder side effects while being more effective. I know you’re waiting for the “but,” and of course there is one... or actually, three.

The bad news is that some of these drugs — if all goes well — will come to clinics no earlier than in mid 2020’s. The good news is that this new approach to vitiligo treatment is well on its way to becoming mainstream. And that’s huge.

Before you go: watch how a rising basketball star Devontae Shuler, Irmo native and Ole Miss guard, is dealing with vitiligo. 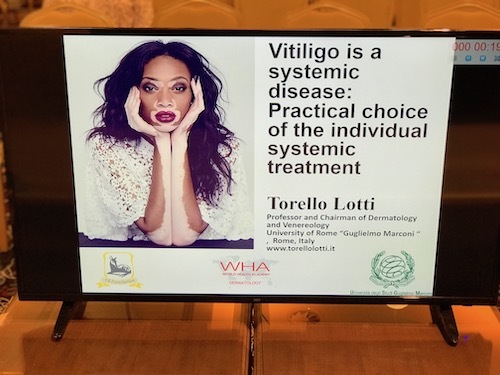