Phototherapy is the treatment of choice for many skin conditions today. After first introduction for psoriasis in Europe in 1988, it became widely used in the United States in the 1990s. Its innovative use in vitiligo came in 1997, but twenty-plus years later it is still an unaffordable luxury in many developing countries.

Ultraviolet type B (UVB) light is a part of sunlight that reaches the surface of Earth in abundance. When sunlight reach the skin, one part is reflected, and the other part is absorbed by the skin. UV radiation triggers various reactions in different skin layers, ranging from therapeutic to potentially lethal. The most common skin response – known as tanning – protects us from the sun, and this process is also the basis for vitiligo treatment. By the way, tanning beds in beauty salons emit mostly UVA light, not UVB and are not suitable for treatment, but increase the risk of melanoma skin cancer by nearly 60 percent.

Phototherapy involves exposing the skin to UVB light or sun for a set length of time on a regular basis, under medical supervision. Most adult patients will notice some results after 24-36 trice-weekly treatments but sometimes it takes three to four months before any repigmentation can be seen. In children, vitiligo stops progression after 12 weeks of NB-UVB treatments, while repigmentation is commonly achievedby the end of first year of treatments. An average 34 treatment visits are required to achieve 50% repigmentation.

You may encounter phototherapy devices with different technologies, such as excimer laser (308 nm), intense pulse light systems (304-308 nm), non-laser light sources (290-310 nm) and micro-focused systems (300-320 nm). Some UVB units use fluorescent UV lamps or bulbs, and others use light emitting diodes (LED) or solid state lasers. There is no difference in results whether the light used to stimulate repigmentation was generated by a laser or a filtered incandescent lamp of the same wavelength. Excimer laser may produce faster repigmentation than narrow-band UVB in early stages of treatment but in the long run they both have similar efficacy.

Conventional phototherapy cost is $85-$100 per treatment. Patients with extensive vitiligo and darker skin type often require 180-220 short sessions over the period of 1-1,5 years to achieve a near complete repigmentation. Starting cost of a laser treatment at $150 or more per session (depending on the size of depigmented area), patients often require 20-30 sessions. Medicare reimburses $76 per non-targeted UVB treatment, and $150-$240 per targeted UVB treatment but not for laser treatments. Home phototherapy device costs in the range of $600-$4,000 and some insurance companies will cover this cost.

We came a long way to the critical point on phototherapy. It is prolonged, tedious, time consuming, costly and often without signs of progress for months.  But now are the good news.

A new type of high-powered 308nm LEDs developed by the health and hygiene company RayVio (Hayward, CA) can substantially lower the cost of phototherapy equipment. Available as a single emitter or pre-mounted, these tiny lights deliver 13 mW at 100 mA. They are rated for up to 10,000 hours of continuous use at 50% of nominal output power, and ±3nm tolerance on peak wavelength. Star board mounting simplifies thermal engineering and allows for rapid prototyping and development of new devices for phototherapy. Priced at $27 per piece and available through DigiKey. 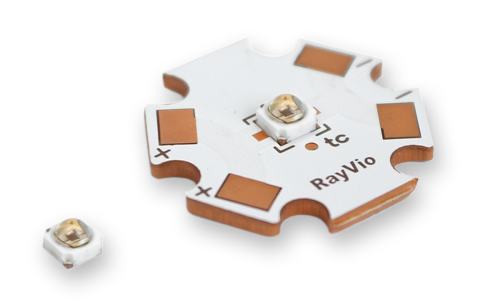